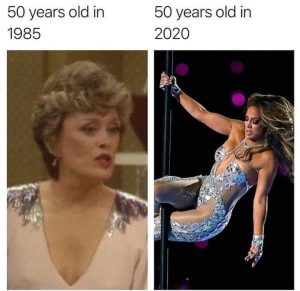 Are you a “Golden Girl” or a showgirl?

This meme of Rue McClanahan and Jennifer Lopez went viral, comparing the “Golden Girls” actress in 1985 to the unstoppable superstar during her Super Bowl halftime show this year.

You get the sense it’s supposed to be a dig at the more matronly, old-fashioned image.

But its message is far more powerful for active agers over 50 who want to live life on their own terms for as long as possible: It’s all up to you.

And, for the men out there, try imagining, say, John Forsythe, who was 63 when “Dynasty” premiered, next to Brad Pitt, 56.

All four of these celebs were healthy and attractive in their own way. One isn’t better than the other.

It’s up to all of us to decide how we want to present ourselves – how we want to look. It’s up to each of us to accept or reject society’s expectations about what’s “appropriate” at certain ages. Our options are endless – limited to neither McClanahan’s nor Lopez’s versions, Forsyth’s tuxedos or Pitt’s shirtlessness.

When you have the strength, stamina and stability to choose, then it’s all up to you.

A common myth about aging says that after 50, people (especially women) face a dreary life of loneliness, physical difficulty, and despair. They’re also (supposedly) stuck in the past, and have no sexuality – according to more myths.

But the opposite is true for millions, who are finding that the “grandma years” are turning out to be the best time of their lives.

Adults 65 to 79 say this is their happiest stage of life, according to a British study of 300,000 people. The study found that satisfaction with life peaked during this period. This jibes with other clinical and anecdotal research in the United States, which has more women over 50 than ever before, according to the US Census Bureau.

It isn’t hard to see why women at this stage of life report such levels of satisfaction.

They are often more able to focus on their own wellbeing than during their child-raising years. They are trending toward retirement and less work-related stress. And many say they no longer feel the anxiety about money and keeping up with peers that drove them earlier in life.

The Role of Fitness

“Contrary to the cultural scripts that say women are old and useless and in the way — diminished versions of their former selves — in reality older women are the happiest demographic in the country,” says Mary Pipher, author of “Women Rowing North: Navigating Life’s Currents and Flourishing as We Age.”

Fitness plays a huge role in helping people this age feel satisfied, healthy and confident. That’s because fitness gives mature people the ability to continue living the way they want to live — to enjoy hobbies, travel, sports, grandchildren and other things they value. It gives them the stamina and agility to avoid injury and hospitalization. It helps them present their sexuality however they choose.

Let’s face it: If you feel good physically, you’re going to be happier. And that will show at any point on the “Golden Girls”/J-Lo spectrum.