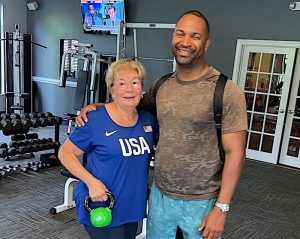 A motto can be effective for anyone trying to get in shape.

Angela Staab uses one you’ve heard before or seen on T-shirts.

But she also has come up with her own bit of advice and encouragement:

Now almost 80, she has used it to motivate her through life as a “senior athlete,” working out with a trainer regularly, enjoying time with family, and improving her quality of life.

It’s GREAT advice for anyone at any age, regardless of your current physical condition.

Here’s the story of how she came to it.

No Time to Exercise, She Thought

At age 55, Angela was a busy healthcare executive with a family who didn’t have time to exercise.

At least, that’s what she thought until one 5K race changed everything for her.

Angela had a goal of finishing in 45 minutes so her team would get the points for her run.  But with just two weeks to train, she didn’t know if she could do it.

With her daughters’ encouragement, she won her age division, finishing in 36 minutes.

She hasn’t stopped exercising since.

Now, Angela is proof that you don’t have to already be in shape to start exercising – and that you can start later in life and still gain all the benefits of regular physical activity.

“My running gave me peace of mind, so I kept doing it,” she says.

Angela has been recognized as a national champion by USA Track & Field 14 times in an array of running and throwing events from the middle distance, to discus, to hammer, to shot put, to the javelin, and super weight.

She will go to Pittsburgh, where she born and raised, for the 2023 National Senior Games and compete in at least nine events. She will be 80. She has competed in previous national and international senior track meets.

How She Keeps Going

When training verged on becoming too much, she was advised to start using a personal trainer. So, she does in order to prevent injury and maximize her time and effort.

Twice a week, she does a range of exercises including weightlifting, bicycling, and using the elliptical machine. On other days, she also runs and cross-trains with pickleball and swimming.

She has arthritis and had a hip replaced four years ago, but she has no plans to slow down.

Her motto is, It’s not how old you are but how you are old.

You’ve seen that one before.

But she stumbled upon a new way to put it, about advice she has for other people over 50 and enjoying a high quality of life.