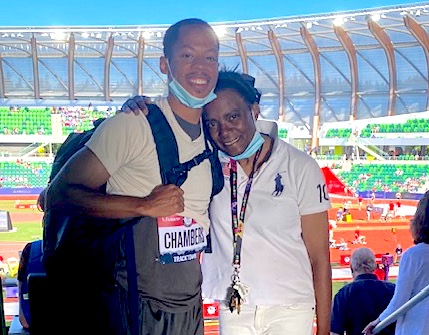 Madonna Hanna does not know how to stop.

She overcame institutionalized racism as a child in Boston’s schools in the 1960s. She bounced back from a near-fatal car crash as an adult. And she persevered after an injury that could have ended her track and field aspirations later in life.

Now, Madonna is 67 and has just competed in the state senior games on her way to the 2020 National Senior Games.

“It’s never too late,” she says about pursuing physical fitness.

The Running Bug Came Later in Life
Madonna, who had a career in fashion marketing, was 57 when she suddenly got the urge to run competitively. Her husband was a high school teacher and track coach. He piled bricks into her backpack, bought her ankle weights, and provided guidance on the track.

In 2014, her Achilles heel popped during a race, and her doctor didn’t give her much hope for competing again. She tuned him out.

Stephen Hanna died of cancer in late 2018. He made her promise she would continue to train and run and “wear the red, white, and blue.”

Now, she needed a coach. In 2019, she met trainer Marcus Chambers, a 26-year-old track champion with his eyes on this summer’s Olympics. She was soon doing the same drills that helped Marcus claim a spot on Team USA for international events.

“He took me seriously as an athlete, which surprised me,” Madonna says.

In the two years they have been training together, Madonna says Marcus has helped her shave significant time off her best marks. He has worked with her on form and efficiency, as well as speed and strength. If Madonna needs a rest, she knows to speak up.

“He had me doing all sorts of little drills and I’m going, ‘What am I doing?’ All sorts of exercises, running short distances and running long distance,” Madonna says. “When he gave me a drill to do, I was confused at first trying to measure distances on the track, how far to sprint, how far to jog. I didn’t keep up right away.”

Marcus says older athletes have the urge to show off for their coach, to push through fire in their hamstrings or an achy shoulder, just as they did when they were 18. Marcus, an All-American in track & field at the University of Oregon and part-time coach, says the temptation is for the mature runner to show their coach how tough they are.

Honest communication is key. He and Madonna have an understanding about soreness and injury.

“If one hip is too tight, if hamstrings are on fire already because of lactic acid, as a coach, I need to know it,” Marcus says.

Marcus has learned that mature athletes have as much drive as younger people.

“Any mature athlete I have worked with is very determined and super-committed,” Marcus says. “If I work with them, I need to be super-committed. I have to be organized. They are going to expect you to get it right.

“They want your best, and I was going to give her my best.”

Even if you have no interest in track and field, you can still benefit from a trainer when choosing exercise of any kind. I’m here to talk, any time you like.