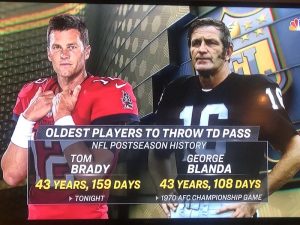 If a picture’s worth 1,000 words, then this one’s as long as the Harry Potter series of books.

On the left is eternally youthful Golden Boy Tom Brady at age 43. On the right is a quarterback from another era, George Blanda, at the same age, looking like a Public Service Announcement from the anti-smoking lobby.

Now, this isn’t about football or quarterbacks or even just cigarette smoking, although we’ll get into that.

Instead, we’re talking about the changes in aging that we’ve seen in the last two generations, since Blanda’s heyday as an NFL great, and today, as exemplified by Brady. The comparison reveals a lot about anti-aging myths that were nurtured by the reality of an earlier time – and persist today to the harm of many people who are in the “second half” of their lives.

Stereotypes Standing in Your Way

Any of these sound familiar?

These are just some examples of ever-present ageism that might’ve had some basis in reality back in, say, the 1960s, when Blanda was thrilling crowds.

If you’re over 50 and want to exercise, quit bad habits, and start better ones, then don’t let ancient negative thinking hold you back.

It’s up to all of us to decide how we want to present ourselves – how we want to look and live, far past the time limits that might’ve applied to our parents and grandparents.

Adults 65 to 79 say this is their happiest stage of life, according to a British study of 300,000 people. The study found that satisfaction with life peaked during this period. This jibes with other clinical and anecdotal research.

Fitness helps people at any age feel satisfied, healthy and confident. It gives mature people the ability to continue living the way they want to live — to move, feel and look better

This is largely about individual choices, but Blanda was a man of his time even more than Brady is of his. Consider these general trends for the US, Canada and other Western countries:

Of course, obesity, high blood pressure and other problems are on the rise – and only about a third of adults exercise regularly. So, it’s sort of “one step up, two steps back” in the broader sense.

You have more options today, and more support to live a long, healthy life. We’re here to help.

Just imagine the stories your photos will tell.