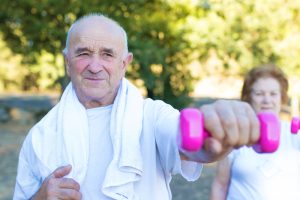 For people over 50 who know they should exercise but don’t, it’s always one thing after another.

They say they don’t have the time. Or money. Or they’re too old…

But none of that will keep you independent as you age. It won’t keep you strong enough to enjoy life on your own terms. And it won’t keep your weight down, regulate your blood pressure, or provide a key social outlet.

Facts are: You have the time, money and motivation. What kills time, eats money, withers motivation? The same thing that’s more dangerous than almost any exercise: doing nothing.

As the famous saying goes, “Those who think they have not time for bodily exercise will sooner or later have to find time for illness.”

Here’s an interesting illustration of how we generally spend our time on this earth.

That’s according to a survey of more than 9,000 people around the world, conducted by Reebok and global survey company Censuswide.

The survey also reports that people stare at some kind of screen 41 percent of the time or 10,625 days.

The World Health Organization and the US government suggest people get at least 2½ hours every week of moderate-intensity exercise. A Harvard study says that just 15 minutes of physical activity a day can add three years to your life. And the Journal of the American Medical Association said last year that not exercising puts you at greater risk than smoking and diabetes.

Still say you don’t have time?

Last time we checked, walking around the neighborhood was free. So was working in the garden. So was tossing a frisbee with your grandkids. So were jogging and countless other forms of good exercise.

If you want to join a studio, gym, or another fitness center, there are many options for every budget.

Exercise reduces our health-care costs, including medications, and the time lost to illness and injury. Investing in yourself with fitness pays huge dividends in all kinds of ways, including financial.

Compare it to the typical costs of these items or services.

Now, we’re not saying you should spend more or less on this or that item – even fitness. The quality of your exercise program is not directly related to the amount of money you can spend on it.

That’s why we consider our pricing very seriously to offer you excellence and value every day, every month, every year.

Think of it as an investment in time and money. The best investment you can make.