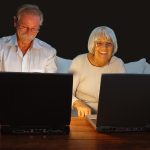 For the past year I have been teaching a Brains & Balance class to the senior populations of a few local towns.  I received my instructor certification for the Brains & Balance Past 60 class through Exercise Etc., Inc.

The class activities alternate between brain drills and balance activities.  It is amazing the results we are seeing in class.  You can actually notice a difference in a person’s balance from the start to the end of class.  The brain drills can be as simple as being shown a picture from a scene in a movie and having to recall the movie name.  Another example of a drill is when people are shown pictures of animals (3, 4, 5, 6 or 7 in a row) and they have to remember what kind of animals they were and in what order.  The key is that the drills progressively get faster and you have less and less time to respond.

An article from AARP “Exercising the body, using the brain may ward off Alzheimer’s disease” stated:

“In one study, scientists found that a history of exercise seemed to fend off brain damage in people who carry a gene that is linked to an increased risk of Alzheimer’s. A second study concluded that people who keep their minds active throughout their lives have lower amounts of a protein that forms the beta amyloid plaques, which are a hallmark of the disease.

“For the first time ever, researchers have managed to reduce people’s risk for dementia — not through a medicine, special diet, or exercise, but by having healthy older adults play a computer-based brain-training game. The training nearly halved the incidence of Alzheimer’s disease and other devastating forms of cognitive and memory loss in older adults a decade after they completed it.”

Whether it is exercise, better balance, or brain drills and brain games, the key is to stay active in body and mind to reduce your risk of dementia or Alzheimer’s Disease.

To find out where I will be teaching the Brains & Balance class this fall, check out our class calendar.